On shrinking and changing habits

When my mum and dad were here on the holidays I handed over several bags full of clothes I have shrunk out of over the past 12 months. It was a big step, because clothes (especially nice clothes in larger sizes) are expensive and by passing them on, you are saying “I’m never going to be that size again.” And I don’t plan to be.

About this time last year I joined Michelle Bridges’ 12 Week Body Transformation program. I had done it once before, but this was the first time I really made any effort. I had lost a little weight during the year (going back to work always helps), but during October I started doing several things that really worked for me.

Since the beginning of 2014 I’ve lost more than 15 kilograms. I’ve dropped two or three sizes in clothes and have pretty much had to replace my wardrobe (although I did pull out some older things that now fit again, which is a fabulous feeling!). Most of that was before February this year. I had aimed to lose another ten by now, but various things (mostly injury and illness) have made it a bit difficult. I kept up the walking (when I wasn’t sick or injured!), even on the minus-six degree mornings in the middle of winter, but stopped tracking calorie intake and slacked off on other exercise. But I’m still determined to lose more, so I signed up for another round of 12WBT and am being a stickler again, recording food and figuring out new exercise options.

My goal on this round is not just to lose more weight but to increase strength. I have to commit to doing more of the 12WBT program exercise, and make sure I stick to my calorie count. So that’s my plan. I’m very proud of what I’ve achieved so far, and am keen to do more to get to a healthier weight for me.

It’s amazing how quickly time races when you are busy. This past week or so has been a blur of socialising (mostly kids), house hunting (still no luck) and publishing activities (whose silly idea was it to put two books together at the same time?!). And just like that, another week is gone!

We had extras here for most of the time – Miss MauMau spent Sunday through Friday here with us, while her mum and brothers were away, to give Mr Flinthart a week on his own. The kids had swimming lessons each day, and we tried to do something else in the afternoons to avoid house-boundness. The girls impressed me by having very few niggles, and only one or two very late nights chatting and giggling! We also had husband’s friend Marty Sunday to Wednesday. Husband flew up to see him in Byron Bay the previous Wednesday, and they were supposed to be driving back with machinery. Somehow that didn’t happen, and they both flew back Sunday instead.

On Tuesday, Master Two became Master Three. We went to Treasure Island for a pirate-themed birthday party with his two little mates and some additional big brothers and sisters and friends. The kids all had a great time, and I didn’t have to clean up 🙂

The swimming lessons have been good – week before last we were out at the school pool for a week. The big kids built up some stamina again with lots of lap swimming, and M3 got to do lessons too (although we had a few problems with that – first day I didn’t take my togs and he was feral, even with M10 helping in the water. Thereafter, I went in with him, which was fine, but on the Wednesday, after several warnings, I got him out halfway through the lesson as he just wasn’t listening – no problems for the rest of the week then. Follow through on your threats parents, it works!). This week we’ve been at the swim school near home, which has been great as we’re walking to and from each morning. M3 isn’t swimming, but I’m impressed with their teaching so I’ve booked him in for lessons starting after school goes back. We were lucky to get MauMau in for a class at the same time as the other two, and they all did well. 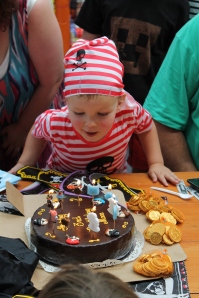 I should note here that I’ve finally decided to get proactive about the weight I’ve put on over the past several years. There’s no more kids for us, so no excuse not to try to shed some of the “baby” weight (and the lazy weight that’s come with it!). I’ve signed up for 12WBT which is in pre-season mode, and during the warmup period, one of the tasks was to record everything you eat. So I started using the My Fitness Pal app to do this, which is a calorie counter too. And boy, does it wake you up! We now own both digital kitchen and bathroom scales to help record this stuff properly, and it’s amazing how wrong you can be about portion sizes when you aren’t taking any notice. In the past three weeks, just by calorie counting and thus better portion control, I’ve lost five kg. Last week I also increased my exercise thanks to the daily walk to the pool, and when we move, I’m getting a cross-trainer. I don’t expect every five kg to be as easy as the first, but I’m encouraged and keen to keep losing! Thanks Alisa and the other friends who showed how well the 12WBT can work, which helped give me a kick.

I realised just now that for the first time in a while, I haven’t got a holiday To Do list! Well, basically it’s getting these books to print, packing the house and moving. Just need to get a house now…

So I suck at this. I hate what I look like and feel like right now, hate that I’ve let myself GET like this, none of my nice clothes fit, and I STILL can’t commit to exercise and cracking down on the bad eating! However, being sick has one silver lining – I’ve lost two kilos this last couple of days. *sigh* Am starting to get some energy back, so will work on getting out walking again. Feel completely blah and feel I might need to resort to desperate measures (ie: some stupid weight loss programme!) when that’s what I’m really trying to avoid, partly because of cost, partly because of non-sustainability. Need a kick in the butt really.

No loss, but no gain either this week. Still 105. Sigh. Crap on exercise, although I think I am getting better with diet. Smaller portions, very little crap, but night time snacking still an issue.

I feel like I’m getting, hmmm, flabbier, I think is the word. Like I might actually be losing something, but it’s causing bits to be more wobbly! I might be wrong, but that’s how I feel right now (and all my clothes look horrible).

Need to bust out the WiiFit and get out walking. Do it! Must DO IT!!

Next week I will weigh and measure, and reset my weekly aims.

Didn’t update cos we had such a busy weekend, and didn’t weigh in at the same time as we were away, but I think I managed another kilo off, putting me at 105kg. This is more chance than design I think, because I’ve sucked at getting any decent exercise, and while I have been eating more veggies and less crap (generally), portion size is still shit. Night-time snacking also an issue. LEARN FROM YOUR MISTAKES WOMAN!! I *know* what I need to do, but I suck at doing it *sigh*

This week I’m working on portion sizes and exercise. At least I have cut way down on the crap I was eating.