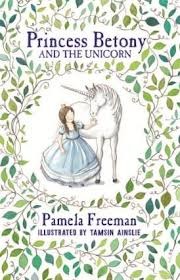 Beautiful illustrations and lovely packaging make this little hardcover a gorgeous gift option for the young reader. A sweet but not twee story about a princess whose mother is a dryad from the Wild Wood, but now lives in a kingdom where magic, particularly wild magic, is not accepted. When the queen disappears, Princess Betony must venture into the forbidden forests to rescue her mother by catching the unicorn – but catching the unicorn requires more of a test of courage than Betony can possibly expect…

A polished piece of writing, as you would expect from award-winning author Pamela Freeman, complemented by the wonderful illustrations from Tasmin Ainslie, this story is not completely what you might expect. Although I was a little disappointed by the sudden ending, I look forward to seeing what comes next in the series.

In this second book of Pamela Freeman’s Castings trilogy, we continue the story of the three main characters, Ash, Bramble and Martine, on what is almost a journey of discovery for them. The three characters, apparently only recent companions, are following a trail to stop a sorcerer who is raising the ghosts of the long-dead in rebellion of an historical conqueror.

Freeman has continued the unusual style premiered in Blood Ties (the first book), in which each chapter is told from the perspective of a different character, including a great many by secondary, sometimes almost incidental, characters. This technique can be challenging to read, as the main thread of the story is frequently interrupted by these digressions. Oddly, in this book, I personally found the incidental vignettes the most enjoyable, particularly the “flashbacks” to ancient times that Bramble experiences when she inhabits another body in the past, and the accompanying inserts encapsulating the lives of the minor characters there. END_OF_DOCUMENT_TOKEN_TO_BE_REPLACED