How I met the author: Lois McMaster Bujold

An infrequent and random series of posts musing about my introduction to some of my favourite writers.

I discovered Lois Bujold on a remainder table in an Australian two dollar shop more than a decade ago. I don’t remember which titles I picked up there. I’m not even sure now whether her name was familiar to me or if it was just chance I decided to buy those slightly tatty (though still unread) paperbacks for the ridiculous sticker price of about A$1.13 each. I did that on occasion back then, when I still read exclusively in print form and still had time to take a chance on books from the remainder bin (sadly these days I don’t even scrounge through these bins any more – so many books, so much digital, so little time…). I do remember they were Vorkosigan books, because for a long time, they were the only books of hers I read. I also know I read the Vorkosigan Saga entirely out of order the first time through, but I loved every single one of them anyway. Whatever those first books were, they led me on a (mostly online) hunt for the rest of the series, which as I recall, arrived in dribs and drabs in mostly the omnibus editions. I devoured each one, and was hungry for more.

When Cryoburn came out in 2010, I bought the hardcover edition, something I rarely did, and was delighted when it came with a CD Rom of almost all (bar Memory) the rest of the series in ebook, plus some extra goodies. When Baen offered Captain Vorpatril’s Alliance advance review ebooks for sale, well in advance of release, I bought it. I did the same thing with the recent Gentleman Jole and the Red Queen. And I bought the hardback editions when they came out later, too. Why? Because I adore this series just that much. I have loaned or given copies to at least a dozen people, insisting they much read the Vorkosigan Saga, and I’ve been delighted when they’ve fallen hard too. In 2011, a friend and I read/reread the entire series (to date) – we even won an award for it! But the reading (in internal chronological order this time) and reviewing was a breeze – when you love something, it’s not hard to do.

Eventually, I realised that Bujold had written other things, fantasy rather the SF, so I hunted them down, or so I thought. I thought I read the four Sharing Knife books a few years ago, but having just “reread” them in the past couple of months (so good!), I realise I must not have read books 3 and 4 – if I did, my memory is in far worse shape than I thought! I have no idea why not, as I own them all in paperback (and now in ebook too), and they are certainly MEANT to be read as a single volume, so it seems very strange that I stopped. Not only that, but for years I thought I had read BOTH of Bujold’s fantasy series, and it wasn’t until I picked up her recent self-published Penric novellas, set in the World of the Five Gods, that I realised I had missed all three Chalion books entirely, so I immediately grabbed them and read the lot, back in 2015. That series is next on my comfort reread pile. 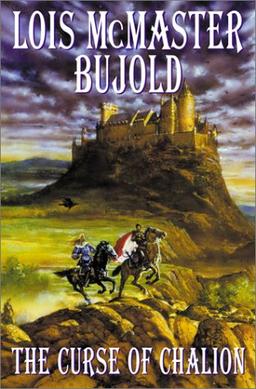 Basically, I’ll read anything Bujold writes. I love that I don’t know what to expect when I pick up one of her books – one of my favourite things about her Vorkosigan series (well, apart from all my OTHER favourite things) is that each book is essentially a different genre, even while all being basically space opera at the core. It’s a clever way to keep a series fresh. Bujold frequently makes me snort with laughter, and all too often has me sobbing, and I think that genuine emotional response to a book is a true measure of its value.

I’ve never met Lois in person. I wasn’t part of the convention-going scene in Australia when she was here as a guest. I do hope someday to be able to thank her in person for her words.

Tagged as How I met the author, Lois McMaster Bujold, Vorkosigan Saga 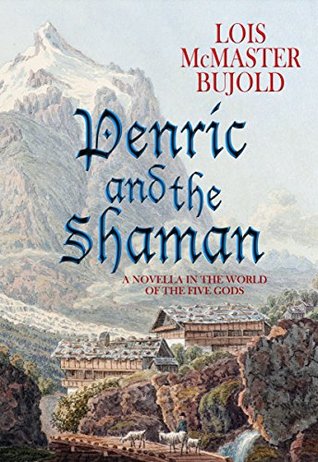 A World of the Five Gods novella

Lois Bujold is one of my very favourite authors. I adore the Vorkosigan Saga, and feel like I should re-read all her fantasy novels, because I enjoyed them the first time, but need a refresher. Reading another novella set in one of her worlds makes this feeling increase.

Sequel to last year’s Penric’s Demon, Penric and the Shaman picks up a few years later, with Penric now a fully fledged divine, scholar and sorcerer, in partnership with his demon, Desdemona. Penric’s present, relatively peaceful existence is interrupted by the arrival of Senior Locator Oswyl, on the trail of a murderer and requiring sorcerous assistance. The two begin the hunt for the apparent perpetrator, Inglis, who has some uncanny issues of his own to deal with, and when the three finally come together, they realise that perhaps things aren’t quite what they might appear.

I really enjoyed this new Penric instalment, with a few reservations. I was disappointed with the lack of women in the story – yes, a few appear, but they are peripheral to the story and no matter how awesome, just not terribly important. Even Desdemona and her many personalities didn’t really get much of an outing. And while the multiple point of view narration worked quite well, I thought that maybe three were too many for novella length (and to be honest, I felt them a bit unnecessary – more Penric would have satisfied).

Having said that, it was still a very engaging read. I liked the growth of Penric’s character, and his changing maturity was well presented. Another interesting aspect (in both this novella and the other books set in the world) is the exploration of religion that Bujold offers, which is quite different to many I’ve come across. The five different deities and the way they interact with the world are quite fascinating. Terrifying, for some (because a visitation from a god isn’t necessarily reassuring), but fascinating for the reader!

In all, thoroughly worth your while as a reader. I think this novella could be read as a standalone (Bujold does an excellent job in most of her books to ensure that) but it certainly rewards the reader invested in the series. I’m on board for the ongoing Penric journey, and really hope Bujold has more to come!

In 2011, Alex Pierce and Tehani reviewed the entire Vorkosigan Saga by Lois McMaster Bujold (as it stood at the time). The links to our award-winning reviews (in the order we read/reviewed them) are below:

The magic of Bujold – rereading and a journey of discovery (Cordelia’s Honor omnibus: Shards of Honor and Barrayar.)

The magic of Vorkosigan: The Warrior’s Apprentice

The Magic of Miles: what it means to be Vor (“The Mountains of Mourning” and The Vor Game)

The magic of mystery: Cetaganda

The Magic of Elli: Ethan of Athos and Labyrinth

The Magic of Family: Borders of Infinity and Brothers in Arms

The Magic of Brothers: Mirror Dance

The Magic of Romance: Miles in Love (Komarr, A Civil Campaign and “Winterfair Gifts”)

The Magic of Marriage: Diplomatic Immunity

The Magic of Endings: Cryoburn

Tehani also reviewed Captain Vorpatril’s Alliance and Gentleman Jole and the Red Queen on Goodreads when they came out.

Yesterday Book Box C for the 2011 CBCA judging year arrived. It was full of all sorts of lovely books, a great many of them fairly chunky YA novels. Normally, this would be cause for much glee, but because I have spent the last couple of weeks immersed in the Vorkosigan saga, I hadn’t actually started Book Box B. Oops. Time for catchup!

Friend me on Goodreads if you want to see me frantically trying to get back my margin of reading time 🙂 And try very hard to stop reading Bujold. I’m *almost* succeeding…

I’m doing a reread of Lois McMaster Bujold’s Vorkosigan Saga with Alex, who hasn’t read it before. I finished the Miles, Mystery & Mayhem omnibus & was moving on to Miles Errant but between Brothers in Arms and Mirror Dance, the chronology says there’s supposed to be a second Borders of Infinity (the first being the novella that opens the omnibus). This is crazy, of course – why would there be a novella, a collection (which contains three novellas, including it’s namesake) AND a novel of the same name!!?? I searched Book Depository, Amazon and Better World Books for some clue to this mysterious story I couldn’t find and thought I must be going nuts. But then, one short, WONDERFUL comment on the Better World Books entry for Borders of Infinity finally gave it away. It mentioned the “framing story” of the collection, and finally the penny dropped. I grabbed my copy of it (never opened because I’d already read the stories in the omnibus editions) and yep, there it was. Four very short chapters of a framing story containing the three novellas. What a drama! And really not adding much to the overarching saga, but good for a completist 🙂