Squeeing over Supergirl: Human for a Day, S01E07

Supergirl – Episode 7, “Human for a Day”

TEHANI: I have watched this episode three times and I’m still struggling to come up with anything terribly *interesting* to say about it! I mean, it wasn’t awful. The dialogue didn’t suck horribly. The effects weren’t eye-rollingly bad. The characterisation stayed true to the established story so far. So why do I feel so “meh” about it?

DAVID: I don’t know! There was actually a lot happening in this episode, and some really good moments.

TEHANI: There were some very cool bits. I LOVED the reveal at the end that Hank is J’onn J’onzz – I got goosebumps! Although tell my why Alex has to keep it secret from Kara? And I teared up when Supergirl talked down the thugs in the store, and James’s face when he took those photos was great.

DAVID: Well, I am big enough to admit when I am wrong! I didn’t see that coming at all, so it was a great reveal to me. Now that it doesn’t matter, a bit of background. Hank Henshaw is a scientist/astronaut who is rescued by Superman when a space mission goes wrong, but his wife dies and he goes insane and blamed Superman—it’s a bit like the story they gave for Reactron. He comes back as cyborg, and is one of the Superman impersonators in the Death of Superman story arc. So, when I heard the name and saw the red glowing eyes, you can imagine what I assumed.

J’onn is a great character, so I am excited to see what they do with him. But, I am a little worried that it will suffer in comparison to Smallville where he plays a similar sort of protector/guide role. I am going to suspend judgement though.   END_OF_DOCUMENT_TOKEN_TO_BE_REPLACED

DAVID: Well, we are now at Episode 6, and in some ways the show is starting to hit its stride—but in some ways not so much. I feel like the show is trying to say some really important things about sexism and equality, but I’m afraid that sometimes the execution doesn’t measure up. I know the feeling, sometimes when I am writing I feel like I can’t do certain subjects justice, that I don’t have the the necessary tools or ability, and it can be incredibly frustrating. But, I am not a professional screenwriter, either! 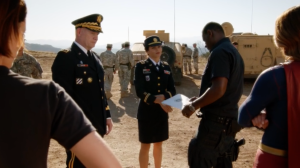 TEHANI: Did you catch the line about the President being a woman? It was blink and miss, but cute. I agree though, the spirit is definitely willing in what they are trying to do but the flesh is sometimes weak. Having said that, I think it’s great that the attempt is being made, particularly considering the audience the show is aimed at.

DAVID: I liked the exploration of acceptability of being angry, and I think Cat nails it when she says women can’t be angry in the business world. You only have to look at the difference in terminology that people use to describe the same mood depending on gender, or even the jokes about hormones etc that men never get, to know how true this is. James makes a good point though, about black men not being encouraged to show anger either, and I think that is probably one of the best lines of the episode—subtly inserted in to point out an inequality, lacking some of the clumsiness of other equally valuable societal observations.

TEHANI: Agreed! This stuff was handled well, I thought. Cat Grant is totally my favourite thing ever – they are using her as a mouthpiece and doing it quite successfully. And isn’t it just so fantastic that we HAVE James to be able to say these sort of things? Red-headed, white Jimmy Olsen wouldn’t quite get away with it. Oh look, diversity, see what can be done?! END_OF_DOCUMENT_TOKEN_TO_BE_REPLACED

Squeeing over Supergirl: How Does She Do It?, S01E04

TEHANI: Please, PLEASE don’t let this turn into a show that is ONLY about boyfriends and girlfriends! I don’t mind it occasionally, but we need to see Kara as more than just a love interest or thwarted love interest or part of a love triangle… She’s freaking Supergirl for goodness sake—there is more to her than boys!

DAVID: I do wonder whether that is something that might be more appealing to the demographic they are targeting, though. I mean, all the relationships stuff isn’t something that really interests me, but I doubt that I would have been invited to their focus groups. So, is it a reasonable thing for them to be doing given the audience they are aiming at? 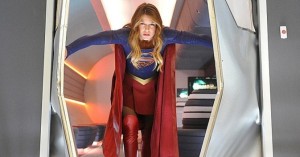 TEHANI: That’s not an unreasonable assumption, BUT… Why do all teen shows have to focus on the relationships? Can we not expect something more of these shows? Because you know, I reckon there are a whole heap of discerning young viewers who would be MORE THAN HAPPY to see people doing things and interacting without lots of love-triangley stuff getting in the way. You know, like real life…

DAVID: I am curious as to your thoughts on the whole “friendzone” discussion. It’s usually a term applied to men, and often has some unpleasant baggage attached.

TEHANI: Yeah, that made me cringe a bit. I get what they were trying to shorthand it to, but it is a bit off, considering the problematic connotations it has.

I do wish this had been aired in the order it should have been though, because there are some important relationship changes that make more sense having seen this episode prior to “Livewire”.

DAVID: I can certainly understand why they rescheduled it, the climax on the train was more than a little disturbing simply in itself. But, there are a few things that would have shed light on the events of the next episode—especially Lucy and James suddenly being back together, and Kara’s seeming acceptance of it. END_OF_DOCUMENT_TOKEN_TO_BE_REPLACED

TEHANI: Well, I’m just going to say it: this episode had my least favourite dialogue of the season so far. Some of it was downright clunky, and a lot of it was disjointed and awfully juvenile. I mean really, would Supergirl say … “You MEAN girl!” in the middle of a battle? It was just a bit naff, and I kind of expect better. And the “coming out” innuendos were cute, but just a touch overdone.

DAVID: I really didn’t know how take those, as nice to see that TV has moved to a point where those references are just part of everyday reference rather than being used as insults, or whether it is appropriating the real experiences of people and using it in a way that cheapens it. I don’t think I am qualified to make that call, but I would be interested to hear from people for whom it has a personal meaning.

TEHANI: I also had some concerns about the mother/daughter dynamics portrayed here. I mean, Kara doesn’t even call Eliza “Mum” (or Mom, whatever…), but Eliza does and apparently consistently has put Kara above Alex. And the kind of non-resolution at the end was very wishy washy. I get what they were aiming for, but it fell a bit flat. END_OF_DOCUMENT_TOKEN_TO_BE_REPLACED

DAVID: Three episodes in and I am still really enjoying Supergirl, but it is clear that they are going the “monster-of-the-week” route which definitely has its weaknesses. I thought the idea of the villain being one who saw Supergirl as a way of getting at Superman was a good one, as was his back story, it’s just a shame that he looked like a cut rate Iron Man. It will be interesting to see where the show goes from here, because there is only so long that this style works before it gets repetitive, but the good news is that lots of shows that have started out like this have matured and developed, and been very successful—Smallville and Buffy are both examples. Hopefully we see more of an emphasis on season long story and character arcs as it goes on.

TEHANI: I don’t really mind the monster-of-the-week just so long as we continue to also get Kara growing into her role as Supergirl, Alex being badass, and lots of lovely team byplay and Cat Grant truisms. Although Reactron really was an Iron Man rip off, you’re definitely right there!

DAVID: We also saw a ramping up of the love triangle and I am definitely Team Winslow—for the simple reason I always go for the underdog, and he is definitely overshadowed by James! However, he hit on the winning strategy of not trying to hold Kara back, but instead supporting her in her decision to do the whole hero thing. I am calling something early, though, I am tipping that we will see Maxwell Lord as another love interest. There was some good development of James with his confession that his calling Superman was about him, not her, and his dependence on the Man of Steel. Superman casts a long shadow.

TEHANI: You and I are on different sides of this one—Team James here! And nopeity nope nope to Lord as love interest. Not a chance there, although he and Cat Grant are another story…   END_OF_DOCUMENT_TOKEN_TO_BE_REPLACED