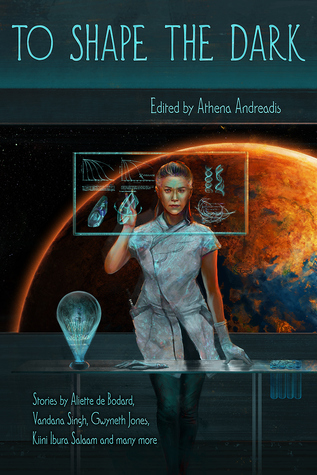 I’m not really a science person. I love science fiction and fantasy, but I know that that science stuff is mostly trappings as far as I’m concerned (because I often don’t understand it – and generally don’t care…) and as long as it’s plausible and doesn’t interfere with my enjoyment of a great story with characters I love (and hate), then I’m good with it. Which is why an anthology all about female scientists is a little intimidating. Not because of the women (duh) but because they all have to be scientists! What if I didn’t “get” it? What if the science is complicated and hard and makes me feel stupid? I was a little nervous going in, but the editor was very sneaky and started the book with stories that were so powerful and so well written that I quickly became immersed and forgot that lady scientists were the purpose because the stories were all that mattered. Which is exactly how it should be. Because even though being a scientist is both integral to the protagonists in each of the stories in the book, and these stories revolved around the protagonist’s profession, it’s not the science that matters – as with any good story, it’s the characters and their journeys that do the heavy lifting. END_OF_DOCUMENT_TOKEN_TO_BE_REPLACED