Sometimes I read something I wrote a long time ago and think, gosh, did I really write that?! (in a good way, mostly…). I think maybe this review about the 2017 Wonder Woman film that I wrote for Grant Watson’s FictionMachine site might become one of those things. I’m super proud of it.

Some of my favourite bits:

In Wonder Woman, there is a sense of joy that has been missing from DC’s cinematic universe, something akin to, but more mature than, that we see in the Supergirl television show. Diana’s naïveté is offset by her formidable intellect and education, to say nothing of her strength of character and physical prowess. Gadot’s portrayal of this is sublime, and is perhaps the key part of what makes the film work so well.

I am not suggesting movies by and about women should be exempt from critique. The problem is we have so few of them, the tiniest fraction compared with the plethora by and featuring men, that to pick one to pieces (as some pundits are so generously doing) is to imply that all films by and about women are inherently flawed. This is of course a fallacy but until we have the same multitudes to examine, it is disingenuous to suggest Wonder Woman should have done more, should have been more, or should have shown more. First there need to be more, and then we can find within those multitudes all the things we can examine.

You can read the whole thing here.

Spider-Man and Snow White – a movie kind of day

We have two extra days off this week, thanks to mid-year break/boarders’ weekend for school. Master Two still has daycare booked though, so it meant the big kids and I could catch a movie or two! We arranged to meet one of Master Nine’s mates for The Amazing Spider-Man around lunch time (we had a baby scan this morning – all looks good!). I’ve seen the Tobey Maguire Spidey movies more time than I can count, thanks to a kid who just loved all things Spidey for a few years, and I though this one held up pretty well. I really enjoyed some of the casting, I loved Gwen Stacy, and thought the effects were pretty well done. It was perhaps a bit long – a few parts went on a bit much, to the point I was actually checking my watch to see how long was left of the movie! But I liked that it was a bit less cartoony than the Raimi version, though I like that too – different enough, although I still wish Hollywood would make some new films!

Anyway, Master Nine was taken off for a sleepover with said mate, and I realised that Miss Six and I had enough time before picking up M2 from daycare to sneak in Snow White and the Huntsman. Now, despite the fact it stars Kristen Stewart, when I first started seeing previews to this, I was a bit excited.

Fair enough, right? If this was the movie we got, it would have been pretty cool, yeah? But then the reviews started coming in, and it seemed the film was probably a bit flat. So I wasn’t too fussed if I didn’t see it at the cinema, not really a priority. But it was there, and we had time, so we watched it. And, well, I think it was okay. I think I think it was okay because my expectations were pretty low anyway. There was some very pretty film-making. Some cool action sequences (I particularly enjoyed William’s archery). But, to counteract that, there was some dull dialogue, odd story choices, and pointless scenes as well. It was much more fairytale-ish than I had anticipated, which was nice, but this wasn’t really balanced with the grittiness of the rest of the film. Stewart as Snow White was both better than I expected, but a little boring too (not, I think, entirely her fault – here I believe scripting and plot let the character down more than the actor). I liked Hemsworth’s performance a lot, and thought many of the other characters were well played, within scripted limitations. Theron was a bit disappointing – perhaps TOO over the top?

POSSIBLE SPOILERS BELOW THE CUT: END_OF_DOCUMENT_TOKEN_TO_BE_REPLACED

Tagged as movies, reviews, Snow White and the Huntsman, The Amazing Spider-Man

I just came home from watching Brave with the kids. I really enjoyed it, and the kids did too, even Master Two, who sat through most of it without his 3D glasses on but coped admirably (this is an achievement, as I’ve not tried to take him to the cinema for a while – last time was a debacle!). I think this movie has great messages in it for adults (especially those of us who are mothers) and teens, and is probably a bit scary for lots of younger kids, but there’s a lot to like. Merida is awesome, and believably so, both when she’s just being herself and when she’s arguing with her mother. I loved that it’s a story about family love, and particularly about the love between a mother and daughter – how many of THOSE do we get? I won’t say it’s faultless, but I liked it a lot – well worth checking it out.

The Three Musketeers: steampunk and swords and not much else…

Okay, here’s the trailer for the 2011 film, The Three Musketeers. Watch it. I’ll wait.

Right, you’re back? Good. You’ve now seen almost entirely all the best bits of the film. I say almost, because WOW were there some brilliant sword fighting scenes. I’m sure my friends with swordplay knowledge will poo-poo the fight scenes, but I thought they were brilliantly done. Sadly though, they really are the best bits of the movie. And I wanted it to be so much MORE. 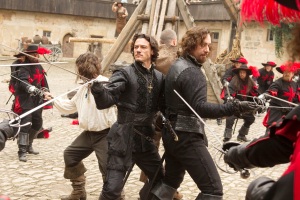 Well, to be fair, I really quite enjoyed watching it. It was fun, it was pacy, there were lots of lovely, MATURE, men to enjoy, there were some great female characters doing cool things (even though those things were, as in much of the rest of the movie, somewhat over the top). But seriously, this story has been told on the screen so many, many times, and to be the brilliant film I really wanted it to be, the film the trailer almost gave me hope for, it had to be something pretty damn special. And regretfully, it really isn’t.

It starts out being somewhat true to the original novel by Alexandre Dumas (although it does deviate from the second half of that story). It has great sword fights, as I’ve said, and the Musketeers are appropriately clever, talented and roguish. But you know what? So were these guys. 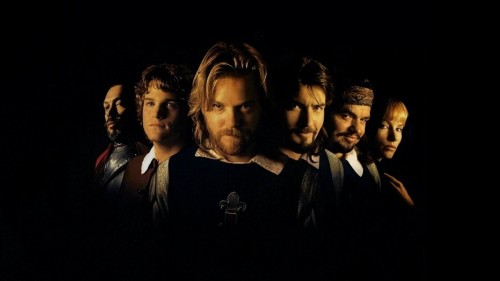 And I think that’s the biggest problem for me, with this 2011 version. Sure, it’s pretty, and I loved the steampunk elements that were brought to it, but in almost every other way, this new version was simply a poor reflection of the very fun 1993 Disney movie. That’s right oldies, that film came out 18 years ago! Eep.

No, the outfit was not explained.

Don’t get me wrong, I think the 2011 Three Musketeers if a fun film to watch – go in, turn off your brain, and enjoy the spectacle. Enjoy Orlando Bloom being a sleazy, pouncy bad guy; enjoy Milla Jovovich in her corset (yes, they did); enjoy Stormageddon’s dad being pushed around (see what I did there Tansy? 🙂 ); enjoy the very silly king of France; enjoy the outlandishly varied accents… It’s all entirely watchable. But it’s not what I wanted it to be. Really not. 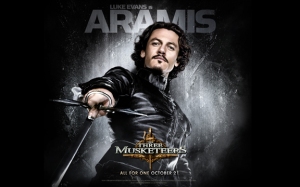 I think a lot of it comes down to the acting – I loved the actors, but I’m not sure all of them were well cast (my favourite was definitely Aramis (Luke Evans) as an actor, but for sheer delightfulness, Porthos (Ray Stevenson) was awesome). Anne (Juno Temple) was fabulous, but under-used. Christopher Waltz took time to grow on me, but seriously, compared to Tim Curry, who wouldn’t? On reflection, I think Waltz was very good as the Cardinal. But as for the rest? Not so much. 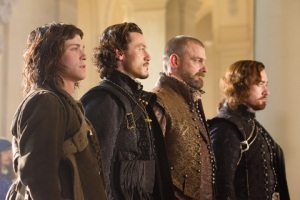 It’s interesting, going through the cast list and checking out their filmographies – I honestly just think many of them weren’t cut out for the role they were cast in, because they don’t lack acting chops. Jovovich (who does suffer from comparison to Rebecca de Mornay) couldn’t manage the subtlety needed to play the role of Milady; Macfayden didn’t have the grit I kind of expected from Athos; and can we please not speak of Logan Lerman as d’Artagnan. Especially his hair.

So yeah. It was fun. It wasn’t what I’d hoped. Maybe viewers who haven’t seen the 1993 version won’t have the same comparative problems I did (oh, and I should stress, I know THAT film was by no means perfect either!), and so a new generation of Musketeer fans will be born. But for us oldies, and those of us who REALLY WANTED a steampunk Three Musketeers to be just brilliant? Lower your expectations and just have fun. 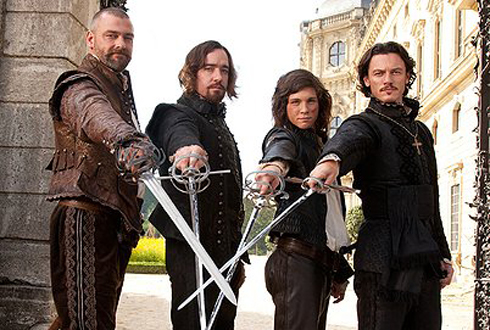