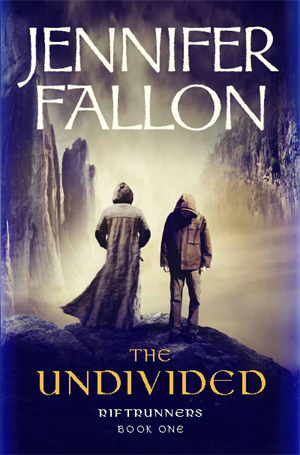 I had a very bad experience at the end of Jennifer Fallon’s last series (the Tide Lords) and was very reluctant to take on her new book, because of my extreme disappointment with how that quartet was finished. However, fellow ASif! reviewer Lorraine Cormack expressed her enjoyment of this new series, and I trust her judgment, so I thought I’d give it a try.

Psychic twins Rónán and Darragh were separated as small children by a rogue Druid – Rónán was thrown through a rift in reality to a world that appears to be pretty much modern day Earth as we know it, while Darragh was left behind to try to hold his rightful place as the Undivided, without his twin.

With no memory of living in a previous world, Rónán (called Ren in “our” reality) nevertheless feels he doesn’t quite fit in, and the strange wounds that frequently appear on his body don’t make his life any easier.

Without Rónán to help him hold power, Darragh is at the point where he will be replaced as Undivided, something that is not a simple deposing of power but will actually mean his, and Rónán’s, deaths. But Darragh has a plan to find his twin, and save them both – but who can he really trust, in this quest to restore the balance?

A fascinating mix of the “real world” and a believable alternate reality in which magic and faerie are realistically embedded, The Undivided is a rollercoaster of a read. Straying from traditional high fantasy tropes into something of a blend with urban fantasy, the young protagonists and their fight to survive in the strangeness of alternate world is engaging and exciting. There’s no doubting Fallon’s skill with a story, and I am glad I took up Lorraine’s recommendation here.

However, be warned – this is definitely book one of a series (it’s not clear how many books there will be), and while some plot points are wrapped up at the end of the novel, the overarching narrative is definitely left unfinished and you will need to read on. Book two is already out though, so hopefully not too long to wait for more!