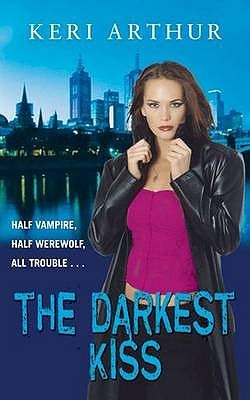 There is a danger with an ongoing series that the magic of the earlier books will wear thin; the combination of characters and situations will become stale; the author will start to stretch the friendship with more and more outlandish and unbelievable events. Luckily, although The Darkest Kiss is the sixth book in the Riley Jenson Guardian sequence, Keri Arthur has not yet run out of fairy dust to sprinkle through the pages.

While Arthur follows somewhat down the path beaten by fellow paranormal author Laurell K Hamilton in amping up the sexual situations as the books progress, at the same time this author amps up the suspense and crime-solving aspects as well, nicely balancing the “otherness” of the story with a solid detective yarn.

For those who came late, Riley Jenson is a rare half breed in a world where the supernatural exist among us. She and her twin brother, Rhoan, are half vampire and half werewolf, a combination that gives them unusual powers. These powers assist them in their jobs as officers for the Directorate of Other Races, which often means acting as sanctioned assassins of rogue supernatural entities. Added to her natural talents, Riley was previously subjected to experimental drugs that caused emerging changes in her abilities and physiology, changes that no one can predict an outcome for. Riley is unique, even among supernatural creatures, and this uniqueness has its own costs.

Central to the strength of the novel is the rich characterization and pacy plot. Although Riley is growing in power and becoming more comfortable in her role with the Directorate, she still struggles with the issues her changes bring with them. Arthur handles this conflict well, developing it without descending into the whiney “poor me” attitude such heroines can be inflicted with in other such novels (not mentioning any names.). Riley accepts and embraces her nature, and while she may be frustrated with the situations it places her in, including those to do with relationships, she finds ways to deal with it.

Set against a modern-day Melbourne background, Keri Arthur avoids the parochialism that sometimes invades Australian-set stories, and instead offers an insight into the city without a colonialism accompaniment, which is as it should be in today’s world!

In this sixth book we come across a number of familiar characters from the previous books as Riley tracks not one but two supernatural serial killers. Characterisations are expanded and relationships rearranged during the course of the story, while Riley continues to come to terms with her changing ability and searches for the answer to her ongoing relationship concerns.

With the multitude of paranormal crime, romance and fantasy books being published at the moment, it’s a challenge for any author to produce a novel that grabs you, pulls you close and suspends your disbelief for over 300 pages. Arthur continues to achieve this feat in her sixth Riley Jenson venture, and I continue to look forward to the next instalment. 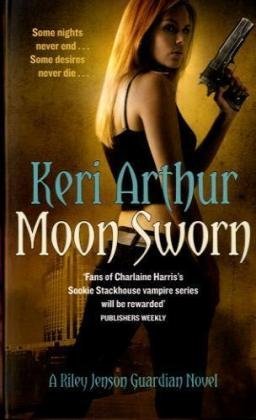 I’ve really enjoyed the Riley Jenson series. It’s been a year or two since I’ve picked one up for some reason, but I’m really glad to have got back into these books. Riley is a great character; Arthur has managed to keep her interesting without being overpowering (literally and figuratively) and the situations the books find her in are credible and well-crafted. It’s Australian urban fantasy at its best, and holds its own against the big overseas names in this genre impressively.

In this, the ninth episode of the Riley books (and the last, I think, although apparently there will be an offshoot series), Riley is wrestling with the decision of whether to quit her death-dealing job and concentrate on her family, or continue in a role she excels at. The forthcoming birth of babies that will tighten the ties between Riley and the men in her life, the loss of her soul mate, and the harsh toll that her job takes on her body, and those around her all make her question the way she lives. Then without warning, she loses it all, and is suddenly on her own, in a way that is baffling and strange. With none of her usual support mechanisms, Riley must figure out why she suddenly feels so strange in her life, and find the way home.

Riley is a fabulous character and Keri Arthur works the characters and story beautifully, crafting a detailed and plausible plot populated by appealing people. I’m impressed with the way this series has been sustained through nine books without losing momentum or becoming overdone., no easy thing to do. I haven’t yet had the opportunity to read any of Keri Arthur’s other series novels, but now that Riley has wrapped up, I’ll be looking out for alternatives!