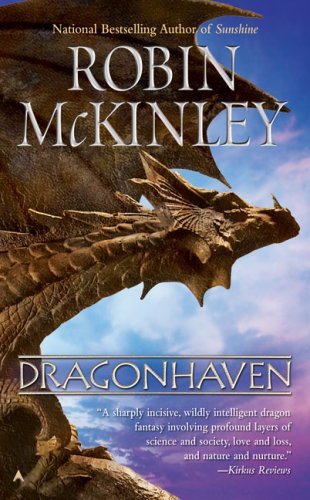 I came late to falling in love with Robin McKinley. I have no idea how I managed to never read one of her books until last year, but once I did, I was hooked. When I stumbled across Dragonhaven on the front table at a favourite bookstore just before Christmas, I couldn’t resist it, even though my bags to go on holidays already bulged with books to read and review. I’m so pleased I made the impulse buy.

This little paperback is densely packed – the 338 page count is misleading because the typesetting is very small (although still readable), which meant I got a much longer read than I expected. Dragonhaven is also young adult, which is not at all evident from the cover, although it is not unexpected from McKinley, who tends to write in a highly accessible manner, neither patronising nor pandering to YA conventions but still hitting YA buttons.

McKinley has a wonderful storytelling range, for while she may be known for her fascinating retellings of fairytales, she has also written excellent high fantasy and fascinating vampires. In Dragonhaven, as the name suggests, she takes on dragons, but in a modern, real world setting.

Main character and first person narrator Jake is fourteen when the events of the story really begin, although as the novel is written as an autobiography of a sort, the narration does cover ground before that time. He is the only child of the chief administrator of Smokehill National Park, one of only three remaining dragon sanctuaries in the world. Yes, dragon sanctuaries. Discovered 200 years earlier in outback Australia (and yes, McKinley gets bonus points from me for the Australian elements!), dragons had been hunted almost to extinction.

Eighty years prior to the events in the book, one man in the USA started a haven to house some dragons where, despite the vastly different climate, the dragons managed to survive. However, while Smokehill is a place to not only preserve but also study the creatures, very few people ever see them, and very little is known about dragons in general. In addition, Smokehill is constantly struggling for funding and, since the disappearance and death of Jake’s mother two years previously, Jake’s life has not been all that great. Then, on his first solo hike in the wilderness of the park, Jake comes across a dying dragon, shot by a poacher who she then killed in self defence. And with her lie her newborn baby dragons. All dead, except one.

The frenetic style of storytelling McKinley uses in Dragonhaven is startlingly different from her usual elegant prose, but works exceptionally well. As a reader, you really “hear” Jake’s voice as he tells the tale, and feel the tension of the situations, both immediate and ongoing. The pressure of the fight to keep the baby dragon (who he names Lois) alive, and then the struggles to a) stay sane while battling sleep deprivation, burns and stress over doing something that has never been done before and is highly illegal; b) keep Lois secret from investigators, tourists and the world at large; and, c) standing by while everyone else at Smokehill tries to weather the storm of the poacher’s death and the subsequent investigations, certainly take their toll on Jake, and this is fully realised through the style of writing.

I was absolutely engrossed in this book – I had no idea where McKinley would take the story and I desperately wanted to find out. The writing was intense, and while it was at times challenging to keep track of time frames, and in some ways was very stream-of-conscious-like, this made sense in the overall story and added to the believability of the story. By the end, I would not have been surprised to find there really is a dragon sanctuary in remote USA, the scene setup is that real, in which dragons are an exotic species that stayed hidden from most of humanity for thousands of years by dint of their location.

Jake’s journey in raising Lois is heart-warming, funny, sad and sweet. I wasn’t completely sold on his characterisation at the very beginning of the book, but it soon stabilised and was logical in terms of the situation.

If you are looking for Deerskin or Rose Daughter or even Sunshine from this book, you won’t find it, but McKinley has done a wonderful and innovative job on a well-worked trope. Two thumbs way up!