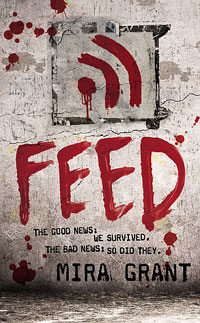 In 2014, humanity cured cancer and beat the common cold. The scientists responsible for these marvels could never have imagined the consequences of their actions.

Twenty-five years after two wondrous cures combined to create a scourge on civilization, the world is a different place to that we know now but still retains similar political and business regimes. The press, as today, plays a major role in this new world, but the format of journalism has evolved to place bloggers squarely on the frontline. Adopted siblings Georgia and Shaun Mason are two of these bloggers, taking the lead in the presidential race of candidate Senator Ryman, a first for the blog-o-sphere. Smart, savvy and prepared to take on zombies and politicians head to head for an exclusive, the Masons soon find themselves embroiled in a far bigger story than even they imagined.

This is one of the most astonishing books I’ve ever read. While I felt it started a little slowly, the momentum builds throughout the book until it got to a point where I literally didn’t want to put it down, I was so desperate to find out what happened next. The author doesn’t take any of the expected plot turns, and time and again I was blown away by where the story went. The back story evolves gradually throughout the book, slowly revealing the seeds of the society Grant has drawn and ensnaring my attention more deeply all the while. I found myself thinking about the events of the book frequently when I wasn’t reading it – the concepts presented are thought provoking and powerful. It examines journalistic ethics, terrorism, political power, corruption, what it means to be a family, friendship, trust, and what a desperate society will do to survive. It looks at all these things without ever devolving into a morality lesson or preaching, making the reader consider the themes without being overbearing about it.

For the first two thirds of the book, Feed revolves primarily around a American presidential campaign – I’m not an expert on American politics, but the process felt realistic to me, based on my very superficial knowledge, which added another layer to an already engaging novel. In truth though, it’s the characters of Georgia, Shaun and their bloggers that are the most compelling part of the book. Georgia’s leadership, vision, courage and strength are realistic and beautifully articulated, while Shaun provides an impetuous foil to her tempered caution. There are many others with plenty of screen time, some more developed than others but all reading as individuals, not caricatures or stereotypes, which is no easy task when handling so many characters on the page. There’s an extensive tip of the hat to Steve Irwin in the book, which Australian readers in particular will most likely get a kick out of, but it’s such an integral part of the story that it makes absolute sense.

I need to be clear that I don’t see this as a horror novel, despite the genre marker of zombies. It is far more a science fiction political thriller; zombies are just a defining part of that, rather than the essence of the book. In many ways,Feed reminds me a lot of Max Brooks’ World War Z – zombies are integral to the story, but it’s the human element of the book that is at the forefront. Feed is a very powerful and completely engaging book, which stands entirely well alone, but makes me hunger for the next instalment.

This review was first published at ASif! on November 8, 2010.