Second Chance – will it get one?

Second Chance may be one of the most interesting shows nobody watched in the past six months. There’s very little likelihood it’s going to get any more than the (shortened) 11 episodes that have just finished airing, because no one is talking about it. The Wikipedia episode entries stopped being updated at episode five. That’s a pretty damning indictment. And yet, despite a few reservations (and let’s face it, we have those even about the very best, most popular shows), I’ve looked forward to watching it every week. It’s been engaging and action-packed and character-driven and fascinating. And it’s based on the story of Frankenstein. What’s not to like?

Warning, there will be general spoilers for some aspects of the show contained below!

If you haven’t seen it (and I know that’s probably most of you), Second Chance opens with 75 year old retired Sheriff Jimmy Pritchard (played by Philip Baker Hall) showing you that he wasn’t really the nicest of guys, and being old and cranky hasn’t helped his status, particularly with his family, any. He’s an alcoholic, womanising, bitter old man, who can’t let go of the ignominious end to his career, when he was disgraced for fabricating evidence (which he justified as being necessary to protect his town). He has a crappy relationship with his FBI-agent son, Duval, and daughter Helen, although he clearly loves his granddaughter Gracie. Then he is killed by men breaking into Duval’s house, thrown off a bridge in what looks to all outsiders like a suicide. And then he is resurrected by billionaire tech genius twins Mary (Dilshad Vadsaria) and Otto Goodwin (Adhir Kalyan), as they search for a cure for Mary’s cancer.

I honestly don’t care about the science behind any of the technology – that’s not what I watch TV for. It’s plausible enough that it doesn’t jar, and the reason behind these two eccentric but brilliant people experimenting illegally to recreate life is solid (in the context of the world). And it’s quite interesting to watch in light of the show’s inspiration from the Frankenstein story, because their motivations are really not the same as those of Victor Frankenstein (although the second half of the season introduces a role that we might be inclined to believe IS the parallel to that character). 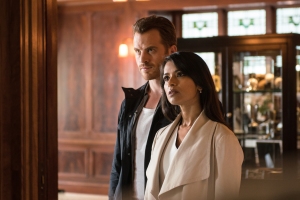 SECOND CHANCE: Rob Kazinsky and Dilshad Vadsaria in the “From Darkness, The Sun” episode of SECOND CHANCE

While Mary is highly functional, running a massive tech corporation, her twin Otto is presented as neuro-atypical, with Mary being the centre of his universe. One of my complaints about this show is how Otto is dealt with throughout the season, as his characterisation is not terribly consistent, and I was very disturbed by the way he was written in the second half of the show. It’s concerning when characters are presented as “different”, and then that difference is used to justify their descent into evil actions. I think this was somewhat redeemed by the performance given by Kalyan in the role, which gives heart and genuine pathos to the character, but it still bothered me, particularly in third quarter of the episodes. 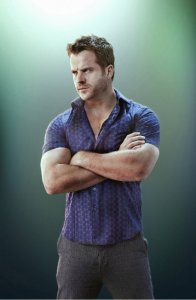 I should talk about Pritchard – resurrected as a much younger “best version” of himself (played by Robert Kazinsky), Pritchard takes on the persona of a byblow son of Sheriff Pritchard to explain his connection to Duval, Helen and Gracie, and insinuates himself into Duval’s work as a way to connect. It was refreshing that he only kept this secret from Duval (his son) for a couple of episodes, which meant they could get on with the business of crime-solving without Pritchard having to continually hide who he was. It meant that their relationship was a focus (which of course, I liked) – Sheriff Pritchard was a crappy dad – though he already knew that, resurrected-Pritchard is frequently surprised and appalled by how bad his relationship was with his children, and takes this “second chance” to try to make amends. It’s done beautifully, because Duval does not pull any punches, and you can see Pritchard really has to work for redemption in his eyes.

While this is a show about a male protagonist, I was pleasantly surprised that in what is a fairly small cast, other important and recurring characters are not quite as heavily skewed male as they could be. Pritchard is surrounded by women – Mary, Helen and Gracie are very important to the story. Yes, Duval, Otto and the male villain are as well, but women are not outnumbered. There is also the role of Alexa, Mary’s assistant (played by Vanessa Lengies), which becomes very important over the course of the season, and I was pleased to see female characters as Duval’s boss at the FBI, and the owner of the bar that Pritchard practically calls home. It shouldn’t make me quite as happy as it did that in the final episodes when Lookinglass (Mary and Otto’s tech company) is failing, the crowd scenes of IT techs are populated by both men and women in solid proportions (and also cultural diversity as well). This shouldn’t be unusual, but it still is comment-worthy. 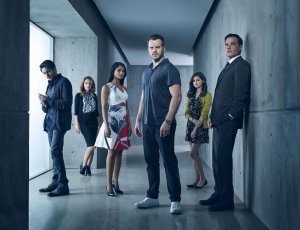 I thoroughly enjoyed watching this one, but while it did end in a way that offered an opening for a continuing story, I’m not holding my breath for a second season. I’m not an expert in why some TV shows fail, but I think that maybe part of the problem with this one is it didn’t really know what it wanted to be. It’s part crime procedural, part scifi thriller, part character drama. I thought it merged those elements pretty well, but it probably didn’t really hit its stride until episode three or four, and by then, I expect the network had decided it wasn’t getting the viewing figures. I have seen so little chatter about it on social media, and don’t know a single other person who has seen it (though I’d be happy to be corrected!), and one happy little viewer does not an audience make. Still, it was an interesting and generally well-acted show that engaged me throughout the season, and I wanted to share that with you. If you get a chance, take a look – let me know what you think.