On shrinking and changing habits

When my mum and dad were here on the holidays I handed over several bags full of clothes I have shrunk out of over the past 12 months. It was a big step, because clothes (especially nice clothes in larger sizes) are expensive and by passing them on, you are saying “I’m never going to be that size again.” And I don’t plan to be.

About this time last year I joined Michelle Bridges’ 12 Week Body Transformation program. I had done it once before, but this was the first time I really made any effort. I had lost a little weight during the year (going back to work always helps), but during October I started doing several things that really worked for me.

Since the beginning of 2014 I’ve lost more than 15 kilograms. I’ve dropped two or three sizes in clothes and have pretty much had to replace my wardrobe (although I did pull out some older things that now fit again, which is a fabulous feeling!). Most of that was before February this year. I had aimed to lose another ten by now, but various things (mostly injury and illness) have made it a bit difficult. I kept up the walking (when I wasn’t sick or injured!), even on the minus-six degree mornings in the middle of winter, but stopped tracking calorie intake and slacked off on other exercise. But I’m still determined to lose more, so I signed up for another round of 12WBT and am being a stickler again, recording food and figuring out new exercise options.

My goal on this round is not just to lose more weight but to increase strength. I have to commit to doing more of the 12WBT program exercise, and make sure I stick to my calorie count. So that’s my plan. I’m very proud of what I’ve achieved so far, and am keen to do more to get to a healthier weight for me.

A publishing sort of year

Most people who read this would know I publish books via my boutique press FableCroft Publishing. In 2015, we’ve brought out two original anthologies, Cranky Ladies of History and Insert Title Here, Dirk Flinthart’s debut collection Striking Fire and the reprint ebook anthology Focus 2014: highlights of Australian short fiction (the third of an annual series) (and there may be a couple more things yet to come…).

What you might NOT know, is that this year I’ve also had several publications of my own! They are all non-fiction, and I’m rather chuffed about them, particularly when they have mostly been for paying markets!

Following that, I have a letter in the Twelfth Planet Press tribute to James Tiptree Jr / Alice Sheldon / Raccoona Sheldon, Letters to Tiptree. This book is amazing and a powerful collection of work showcasing writers inspired by Sheldon’s story and her work.

Adding to these essays, I recently had an article published in the magazine Magpies, aimed at school libraries and librarians. I pitched the idea to the editors and was delighted to have it accepted, even though I only had about a week to then interview the authors and write the 1600 piece! The article is titled “Collaboration is the human superpower”, and is a feature focusing on the recent YA novel Zeroes by Scott Westerfeld, Margo Lanagan and Deborah Biancotti within the broader context of the superhero popularity of today. It’s not online anywhere but I will probably blog the article when the exclusivity period ends.

And I was really pleased to do my first review for Books+Publishing this month! I think it’s the first time I’ve been paid to write a book review, and I’m hoping to be able to do some more. I reviewed Alison Goodman’s forthcoming novel Lady Helen and the Dark Days Club which is out early 2016, but the review is behind a paywall, sorry!

Oh, and just last week I was part of the latest SF Signal Mind Meld, on the topic “The books that made us love science fiction and fantasy” – this one WASN’T a paid piece, but I had a lot of fun writing it and check out the fantastic company I’m in!

Two weeks pass like the blink of an eye. At least I didn’t lose most of the break to Teen Wolf like I did LAST break, but a full week of gardening apparently sucks your time just as much as an addictive TV show 🙂 The skip was absolutely chockers by the time it was picked up on Friday last week; I don’t reckon we could have fit even one more stick in! And the yard and gardens looked SO much better for it. But I don’t want to have to do that again – it’s just not my thing… 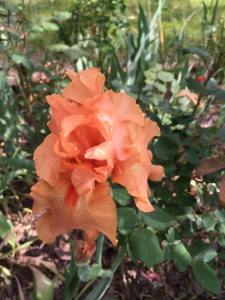 In between the yard work we managed to sneak in some socialising – first up was a great get together (the deck warming!) at Donna and Matt’s place, which was just delightful. An ever-changing guest lineup as people came and went throughout the afternoon, with much excellent conversation and food! We also spent a morning with Karen and her kiddies, with lots of baby cuddles at last! Miss G had stroke clinic for swimming three days both weeks, and Master D had daycare, so it was just me and Master J and Master M for a lot of the time. Husband rolled in and out briefly, between work and Tassie trip, and Granna and Grandpop arrived around lunchtime Friday, just in time for me to head to Conflux! 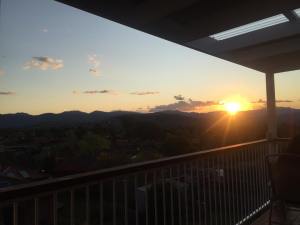 The view from the deck at the deck warming…

I was one of the guests of the Conflux 11 convention, so went in for the opening ceremony late afternoon. MC Laura Goodin did a lovely job opening proceedings, and I had a chance to catch up with a few people early on. I had a little car drama (mechanical issues) when I went to pick up Dirk Flinthart from the airport, but managed to not be too late to collect him! I then took advantage of my night alone at the hotel (was joined my Miss G for the rest of the weekend) and crashed out very early indeed – it had been a big week.

The convention saw me on a heap of panel items, but we started out on Saturday with the launch of Striking Fire by Dirk Flinthart – Dirk arranged at the last minute to have wine delivered and we managed plastic cups to serve it in, alongside the chocolate I had organised. We also had a prize draw of the Dirk books plus a tote bag and notebook, and it was a very convivial and fun launch! 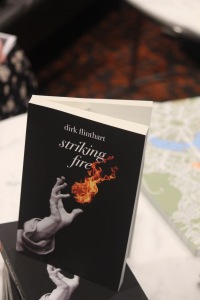 After lunch I had an insane five panels in a row, and it was a bit like that for the whole weekend! Thank goodness for Elanor and Miss G, who took excellent care of the FableCroft sales table while I was not there. It was a wonderfully interesting program (thanks to Leife Shallcross) and I hope I didn’t repeat myself much! Luckily my fellow panelists were erudite and articulate and they all went pretty well, I think. I thoroughly enjoyed myself, and though I didn’t do any of the evening socialising (except a brief sojourn at the banquet with Miss G), I still got lots of time to chat with friends, get to know new people, and be inspired by the writers and creators around me.

SATURDAY
Short Story Markets
The Editor’s Diary
What about Who?
Cranky Ladies of History
The Appeal of the Superhero
SUNDAY
Guest of Honour Talk: Tehani Wessely (thank you SO MUCH to Cat Sparks for interviewing me for the GoH talk – she asked awesome questions!)
A Big Enough Audience
Paying for our passion – writing sacrifices
MONDAY
Alternate Publishing Options
Literary Awards and Judging
Book Promotion
Words of Wisdom
Closing Ceremony and Awards

See Cat Sparks’ fab photos of the convention at her Flickr, here!

Once the convention was over, we had the rest of the week for family sorts of things. This included Miss G turning 10 (where on earth has THAT decade gone?!) and an impromptu bowling party – she had swimming for four hours in the morning, so I sneakily arranged to pick up a couple of her school friends to join us for bowling. The look on her face when they popped up out from the back seat of the car when we picked her up was delightful 🙂 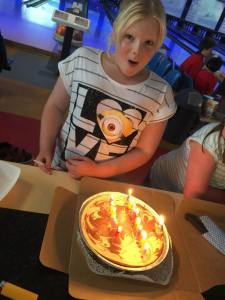 Mum and I got some quality shopping time in, and Grandpop and the big boys variously got some fishing (although didn’t have much luck with the catching – not really the goal though, I reckon…) and we enjoyed just hanging out. Husband was home briefly and we managed to get the mechanical issues quickly sorted out for the car he drives back and forth several hundred kilometres per week, as well as duck in a find a new phone for him before he disappeared into the sunset again! Making the most of the short periods of time we have 🙂

And now it’s the last day of the holidays. Granna and Grandpop have gone off for a bit of a driving holiday on their way home, and I’m working through a few last holiday jobs and tidying up before back to school tomorrow. I think I’ll call this break a big success! 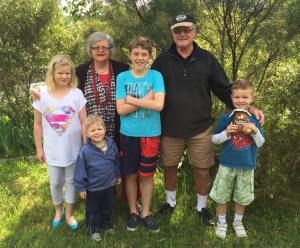