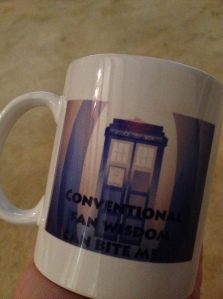 To celebrate the airing of the Doctor Who 50th anniversary special (just MINUTES away!), I’m giving away this very excellent “Conventional fan wisdom can bite me” mug. Inspired by something David wrote in one of our conversational reviews, I couldn’t resist turning it into mugs and t-shirts, and now you* can have one** too! All you have to do is leave a comment here, summing up “The Day of the Doctor” in a NON-SPOILERY way! Why non-spoilery? Because David hasn’t caught up yet and he won’t be able to watch it until he has! So let us know your thoughts on the anniversary special in a way that David could read, and one lucky commentator will win the gorgeous (and very practical) mug. CLOSES Saturday 30 November, 2013.

*Sorry, open to Australian commenters only (unless you’re happy to pay postage internationally!).

**Giveaway mug is not this one, because this one is mine… You (if you win) will get one the same, but in a box, brand new! 🙂

We’ve had a fairly busy few weeks round these parts. Two kids’ birthdays, school performance, fishing, parties with friends, job applications, lots of work stuff. But here are some photos from the goings on, in lieu of an actual decent catch up post! 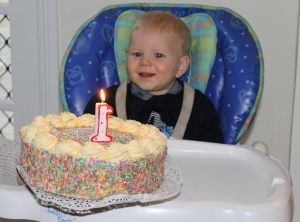 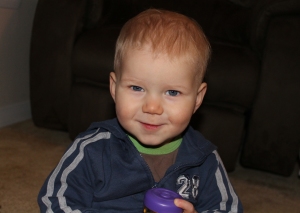 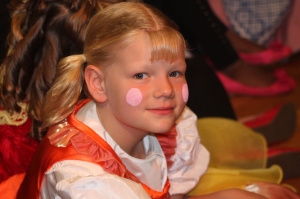 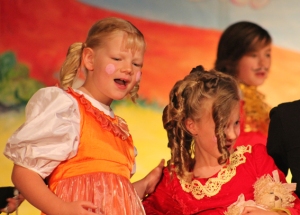 New Who in Conversation: Vincent and the Doctor / The Lodger S05E10/11

David is coming to New Who for the first time, having loved Classic Who as a kid. Tehani is a recent convert, and ploughed through Seasons 1 to 7 (so far) in just a few weeks after becoming addicted thanks to Matt Smith – she’s rewatching to keep up with David! Tansy is the expert in the team, with a history in Doctor Who fandom that goes WAY back, and a passion for Doctor Who that inspires us all.

We are working our way through New Who, using season openers and closers, and Hugo shortlisted episodes, and sometimes a couple of extra episodes we love as our blogging points. Just for fun! Tansy and Tehani love this season so much we’re making David do more work – we’re changing up our usual plan and reviewing each episode, in sets of two. 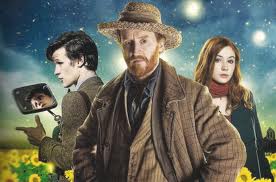 “Vincent and the Doctor”

This is one of my very favourite stories so far. It always ALWAYS makes me cry (sometimes in different places), and I adore it for so many reasons, the guest actors Tony Curran and Bill Nighy being two of them.

I have an innate fondness for this story because of what it did for my daughter. Raeli must have been six or so when she watched it. I hesitated over showing it to her at first because of the darker themes of suicide and depression, but she took to it beautifully, allowing us to have a conversation about mental illness that was very important.

She also fell in love with Vincent’s artwork through this story. I sent her outside at a party once to play with chalks on the concrete and she recreated about four different Van Gogh paintings. With the Doctor Who twist on each, of course. It was a beautiful realisation, and her interest in art progressed from there – I later found her a gorgeous picture book called Vincent’s Colours which pairs lines from his letters to his brother with images of the paintings he is discussing. END_OF_DOCUMENT_TOKEN_TO_BE_REPLACED

New Who in Conversation: The Hungry Earth / Cold Blood S05E08/09

David is coming to New Who for the first time, having loved Classic Who as a kid. Tehani is a recent convert, and ploughed through Seasons 1 to 7 (so far) in just a few weeks after becoming addicted thanks to Matt Smith – she’s rewatching to keep up with David! Tansy is the expert in the team, with a history in Doctor Who fandom that goes WAY back, and a passion for Doctor Who that inspires us all. 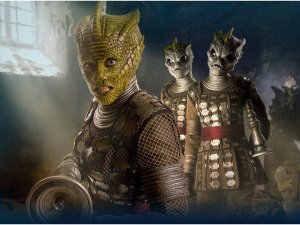 Well, I’d completely forgotten what this one was about until Tansy nudged me violently. And so I dove into rewatching with quiet joy, which I can’t talk at all about because of David (hurry up and CATCH UP!) 🙂

Looking back, I can’t quite tell why I would have forgotten it, because there’s some great stuff here. I have a feeling I confused it in my head with “The Rebel Flesh/The Almost People” from season six, which is silly because I like this loads better…

This two parter, and “Cold Blood” in particular, is my least favourite part of the season. There’s a lot to like here – and I do like many aspects, particularly the return and redesign of the Silurians, a lot of the dialogue, and the chilling bookend of Amy and Rory waving to themselves, and then Amy alone after Rory has disappeared. Acting highlights include Meera Syal as Nasreen Chaudry (blatantly auditioning for a run in the TARDIS) and the lovely Stephen Moore as the Silurian leader. Not to mention Neve McIntosh playing two distinct characters excellently beneath what could be quite unforgiving prosthetics.

The character of Ambrose is a big problem for me, largely because she is written and played so harshly that she is a) deeply unlikeable and b) consistently stupid. In fact, there is a term for her role in this story – the stupid ball – which means she is forced by the script to act in a stupid way, in order to make the plot work.

This might be less grating to me if it wasn’t for the fact that the other glaring problem of the story to me is also gendered. I quite like the idea of the military caste of the Silurians being represented by the women and the science/thinky caste being men, BUT what we get in the script is the female Silurians being violent and irrational and the male Silurians being calm, sensible and charming.

Darn it Tansy, I was so busy being impressed by the way the Silurian society worked I didn’t consider all that…

This combined with the violent and irrational Ambrose representing humans is … a bit icky to me. Even worse, the Doctor notes and condemns the irrational violence of Ambrose and the female Silurians, but embraces Dr Malokeh as a brother in science and generally finds him adorable despite the fact that Dr Malokeh has basically been quietly and gently torturing humans in the name of science.

But not the children! 🙂

The whole thing leaves a bad taste in my mouth.

I’m not sure the men looked completely rosy though. Tony does suggest he’d betray humanity if Alaya cures him, and he also suggests dissecting her for defence purposes… 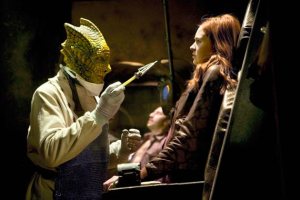 When I was making notes about this story, I wrote:

Admittedly I spelt his name wrong, but the point remains. He had been dissecting prisoners and, as Tansy points out, he basically gets a free pass from the Doctor.

I agree that the Doctor gives him a free pass, but he also gives Ambrose a free pass, despite the fact her actions led to such a terrible outcome (for Rory at least, if not necessarily the Silurians, because I kind of think there was no way almost-present-day society would have accepted them – we can’t even accept each other 😦 ). He wasn’t nearly so angry at her as I expected, given what happened.

He’s pretty scathing, I thought, and the scene at the end he appears quite contemptuous towards her, making it clear that her job is to make up for what she did by helping her son on his quest to “get humans ready” for the Silurians. So she doesn’t even get to redeem herself directly, either, only through her child!

Something I found interesting about this episode, though, was the many parallels between this story and the first appearance of the Silurians. You have the more moderate leader trying to rein in the younger hot head, the blinkered viewpoints of some of the key humans, the Doctor desperately trying to keep the peace, an accidental death derailing the best efforts of those trying to find common ground between the two species – and, of course, the Doctor enraged by humanity giving into its worst instincts and making his displeasure very clear. Obviously they invert some of the situations, but there are a lot of similarities.

TANSY:
Yes, I quite like that part. The actual shape of the story I don’t mind at all – even the mining set has a bit of the Pertwee vibe about it. And I haven’t forgotten that the Doctor being patronising about humans and violence and exhibiting double standards depending on how much he likes you is also a carry over from the Classic series.

Likewise, the Silurians here are given a much more complex and inclusive society than the rather dull men in rubber suits from the old days.

See, I have no idea what you’re talking about! I figured Silurians had appeared in the classic series, because it’s specifically discussed, but I’ve been tricked like that before!

I didn’t really understand the complete redesign of the Silurians, though I do think they looked good, I would have preferred to see an update of the classic design. I did like the subtle dig at the dodgy dating of the species, though!

I loved the prosthetics! Fantastic makeup and design, that’s for sure.

TANSY:
And a brilliant portrayal by Neve McIntosh as the female Silurians which, cough, will have far greater and more awesome ramifications.

Indeed… 🙂 I thought Amy and Rory were both excellent in this too – Amy once more charging into danger and poking her fingers in where she probably shouldn’t, and Rory being completely the “best of humanity” the Doctor is aiming for.

Yep, shame they killed Rory off at this point, he had real potential as a great companion. The scene in the TARDIS with Amy trying and failing to save his memory is one of the most genuinely emotionally excellent moments of Doctor Who. Chilling stuff.

Yes, a shame Rory is completely dead and gone now. Very sad. But it is absolutely a great scene, agreed.

I thought the scenes where you can see the couple in the distance, and then the changes, particularly effective.

But completely sad, right? Cos Rory’s dead, don’t you know? I just watched a bunch of Classic Who and it’s quite amazing how quickly they get over the loss of a companion – wonder how quickly Amy and the Doctor will move on…

Classic Who Conversation podcast – Genesis of the Daleks (1975)

The Specials: “The Next Doctor / Planet of the Dead / The Waters of Mars“

The Specials: “The End of Time”