I got home from Continuum 9 in Melbourne last night, after a short overnighter trip I only decided to make about a week and a half ago! I’ve been to Melbourne cons before, but not Continuum. I’ve managed to make two cons and the Aurealis Awards this year, which is a change (there has to be a silver lining for husband’s redundancy from work!), and I’m glad I got to go.

Before I even arrived, David, Tansy and I had won a Chronos Award for our Doctor Who review series! I was very excited, because the Chronos trophies are so very pretty. We let David keep it though, because to be fair, it IS an award for Victorians, and we wouldn’t qualify without him!

While it is the first convention I think I’ve been to that I wasn’t almost exclusively chained to the Dealer Room, I only went to a couple of programmed items. To be honest, I mostly hung out with friends, old and new. I did a very short duty on the table for Justin of Slow Glass Books, who is so generous to us small press folk. I have to say though, that NK (Nora) Jemisin’s Guest of Honour speech was a definite highlight and I’m very glad I attended. She has posted it online to share with the world, and I think the world should read it. Really enjoyed the John Richards and Ben Mackenzie program items – disappointed I had to leave before the end of both (once for noisy baby, once to get to the airport on time for my flight home!). If you aren’t listening to the Splendid Chaps podcast, I highly recommend it! And I also had to leave the Writer and Critic recording because of noisy grumpy bubs, but at least I can listen to that one later too 🙂 I’m very sad I missed the launch of Caution: contains small parts, Kirstyn McDermott’s Twelve Planets collection, as I had already left to come home, but I was lucky enough to sneak my subscriber copy beforehand!

I was asleep by 8.30 on Saturday night – babies are both a blessing and a curse… And I enjoyed breakfast with Cat and Rob at the hotel both mornings – and everyone was rather tolerant of the grumpy tired baby I had in tow!

WA-ish fans were relatively prolific – spent time with Ju and Sarah, chatted with PRK and Elaine, saw Michael and a couple of others. As always, there were people there I only saw very briefly in passing, and didn’t even get a chance to say hello to – sorry!

The venue was a bit disappointing. The location was excellent – a nice walk from Southern Cross station (from Skybus drop off), and right in the thick of shopping/cafes etc, with a HAIGHS in the hotel foyer! However, inside was a bit different. My room was great (I was upgraded to a Superior King room!), the staff service excellent (as always, in Melbourne), but there was no lift access to the convention rooms level (except by the freight elevator) and one of the two hotel lifts to the upper floors (including the breakfast restaurant) was out of action. Tricky with a pram, can’t imagine how difficult for people with mobility issues. There was no tea/coffee within the hotel (a number of people who attended Conflux recalled the strategically placed hotel coffee cart there with much fondness!), and sure, it’s not far away to get some, but once you leave the hotel, you tend to wander off for a while, which means it’s not very cohesive. Interestingly, there were also no baby change facilities within the hotel, which I thought was really unusual. And the panel rooms were too small! A lot of the panels were overflowing and people couldn’t come in. 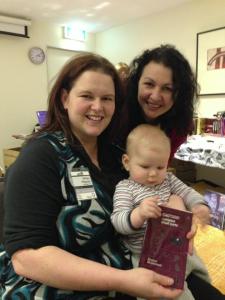 Bubs and I with Kirstyn and the first copy of Kirstyn’s new book, personally inscribed! Photo courtesy of Cat Sparks.

All that said, it was a pleasant congoing experience in general – the committee seemed on the ball and were helpful and friendly at every turn.

Glad I went and have to say, BRILLIANT GUEST – Nora was excellent.