Wherein we act a little touristy 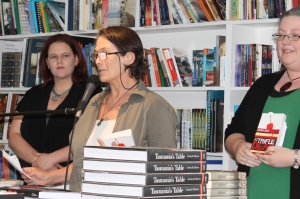 We have had a lovely couple of days for the beginning of our extra long, long weekend. The kids took the day off school on Thursday and after a short visit to the new house (which we got the keys for on Wednesday afternoon – very exciting!) we headed down to Hobart. First stop was Hog’s Breath, a favourite for the family – not quite as good as the Rockingham one, we agreed, but very yummy still. We then checked into our apartment, in Salamanca, and rested a bit and got ready for the evening. The purpose of our Hobart trip was to attend the launch of Livia Day’s new book, A Trifle Dead (which I was emcee for). Lovely to catch up with friends there (and of course “Livia” (aka Tansy) and the family), and finally meet some online buddies too! The launch went very well, with Stephanie Smith doing a great job as official launcher. 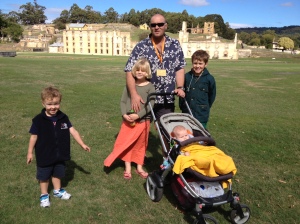 An early night once Miss Seven and I returned to the apartment, but not a restful one thanks to an upset baby in the cot next to my bed, so I was a bit weary by the time we got underway on Good Friday. Still, we started to go the long way home, up the east coast, for something different, but then husband saw signs for Port Arthur and we detoured to visit the Historical Site there. It was astonishing – a MUCH grander scale than I’d imagined, and very interesting. We’ll have to go back, as we were a bit tired for the amount of walking required (and the three year old was getting to “feral” by mid-afternoon!), but I highly recommend a day or two there if you ever get a chance.

We thought we might stay overnight somewhere nearby and maybe go back for a few hours today, but once we got in the car and the two little ones fell asleep, we just decided to keep on driving. Home about 6.30 pm and very pleased to get to bed not too much later!

Today has been pleasantly homely, even entailing cooked (by me) breakfast and lunch! Have been tidying and washing and looking at new things for the new house – I must say, a six day weekend is rather nice.

New Who in Conversation: The Sontaran Stratagem/The Poison Sky (S04E05/E06)

David is coming to New Who for the first time, having loved Classic Who as a kid. Tehani is a recent convert, and ploughed through Seasons 1 to 6 (so far) in just a few weeks after becoming addicted thanks to Matt Smith – she’s rewatching to keep up with David! Tansy is the expert in the team, with a history in Doctor Who fandom that goes WAY back, and a passion for Doctor Who that inspires us all.

We would like to thank everyone who nominated our “New Who in Conversation” series for the William Atheling Jr Award again this year – it’s a great honour to be on the ballot! Voting for the annual Ditmar Awards (which the Atheling is included in) is open to all members of  Craftinomicon (2012 Natcon – Melbourne) and Conflux 9 (2013 Natcon – Canberra), and can be done online.

Righto, so we’ve skipped over “The Fires of Pompeii” and “Planet of the Ood”, moving along to “The Sontaran Strategem/Poison Sky” double episode (not Hugo nominated, but Tansy felt they were important to talk about – we agreed!). I would like to mention a couple of things about the preceding two episodes though. In “The Fires of Pompeii”, we saw Donna make the Doctor to rescue just one family from the eruption, effectively forcing him to remember that EVERYONE MATTERS, and clearly setting her up as his conscience and moral compass. This is interesting when followed by “Planet of the Ood”, when his compassion is demonstrated in his fight to save the Ood despite their apparently murderous tendencies. Donna’s impact is swift and cannot be overstated, as it becomes so important later on!

“Planet of the Ood” is an excellent episode, because it highlights the idea of the Doctor as an outsider who challenges the status quo of the times and places that he and his companions arrive in. The episode manages to ask some important moral questions and has some genuinely creepy and shocking moments, like when we find out what their translation sphere has actually replaced.

And, I always enjoy a good historical episode, especially one where we know exactly what *has* to happen to fit into history as we know it, and wonder how the Doctor is going to save the day (or the people in the episode that we care about) given that catastrophe is going to strike, no matter what.

“The Fires of Pompeii” is one of my favourites. Not only did they use some of the very authentic sets from HBO’s Rome, but they also used some really delicious snippets of real Roman social history. And Donna is wonderful in it. He needs her so much … and it’s wonderful to see how much she blossoms and grows in confidence as she realises that.

Two good episodes to set us on the right path for the Donna/Doctor relationship. And then we come to “The Sontaran Strategem/Poison Sky” duo!

Given the title, it is hardly a spoiler to talk about how excited I was to see the return of one of my favourite alien races from Classic Who. I always loved the concept of the Sontarans and their endless war with the Rutans, so this was a bit of a fanboy moment. We’ve noted how there has been a concerted effort to show the New Who is a continuation of what has gone before, and it always thrills me to see one of the familiar foes of the Doctor. They may not be the Daleks, but the Sontarans have certainly given the Doctor some trouble. In fact, they are one of the few races to successfully attack Gallifrey itself, IIRC.

TANSY:
Oh, Sontarans. I love them. I may love them more that Cybermen and Daleks, even if mostly when I think of them it’s of the first appearance of one Sontaran in “The Time Warrior”, a wonderful Pertwee story which was also Sarah Jane Smith’s debut.

I really like what the new series has done with this classic monster, and this story by Helen Rayner (the only female writer of the new series!) is a really good reintroduction to them. The premise of the Sontarans as a ruthless clone race eternally at war, and their motives for what they are doing to the Earth in this particular strategem of theirs, all comes together really nicely. The clone aspect was not overly significant in the old series, so I like the way that is emphasised here along with the military obsessions.

They’re short but feisty! I know some fans winced a bit at the Sontar haka, but I loved it as a pointed, effective way to show what the Sontarans are like to a modern audience. It’s also great to see Christopher Ryan back in Doctor Who playing the leader, and oh I did spot Dan Starkey and the gap between his teeth as one (or many?) of the less high ranked Sontarans. I WONDER IF HE’LL BE IMPORTANT TO US IN THE FUTURE. END_OF_DOCUMENT_TOKEN_TO_BE_REPLACED

A quick post about FableCroft’s new books, two of which are being launched at Conflux in ONE MONTH but already here and ready to be posted out!

1. Publishers Weekly reviewed both The Bone Chime Song and Other Stories by Joanne Anderton and One Small Step, edited by me. FableCroft’s first reviews at PW, which is very exciting!

2. Pre-orders are available at the FableCroft website, and all orders placed now will be posted over the next week – that’s right, before the launch!

3. You can also try your luck to win a copy at Goodreads – details at the FableCroft website.

4. We re-released Tansy Rayner Roberts’ first novel, Splashdance Silver, in ebook a few weeks ago – it’s a fantastically fun read, and super cheap! The sequel novel, Liquid Gold, will also be out soon.

5. Not, strictly speaking, a FableCroft announcement, but I’m off to Hobart on Thursday to help launch Tansy’s newest book, A Trifle Dead (by Livia Day, Tansy’s alter ego). Join us if you can at the Hobart Bookshop, 5.30pm Thursday 28 March, 2013!

6. And I’m merrily working on a couple of other projects that I will be announcing soon – fun!

I mentioned in my first post that one of the nicer cups of tea I’d had in Launceston was, of all places, the Bunnings cafe. Well I realised today I’d forgotten another nice cup I’d had in another unexpected place – the cafe at the Aquatic Centre. If you go to the kiosk side, you just get a takeaway tea. But hidden on the non-pool side is a pleasant cafe called Cube Aqua, which has a surprising range, reasonable prices, friendly service & even a couple of comfy lounges. And they do a nice cup of tea! Not teapot & loose lead, but nice just the same. And if you’re into that sort of thing, their hot chips are really quite delicious!

Questing for tea: The Pantry

Another Monissa suggestion to try, so we met up this morning to have a go at The Pantry, in Charles Street. Friendly, efficient service, reasonable prices, and a very interesting separate “lounge” with kids toys, comfy lounges and room for prams! The tea was teabag in a teapot, but it was very nice, a generous serving with lots of milk on the side. We also had hot cross buns for a snack, which were yummy! In all, happy to visit again, especially when the kids are in tow.

Master Three, Bubs and I wandered through Target on our way to our appointments today, and finally bit the bullet and picked up M3’s new car seat, as we need to do some switching around of seats. We then headed to a friend’s for another cup of tea and a chat (and to meet their new puppy, an absolutely ADORABLE Labradoodle!), but we couldn’t stay too long as we had to get to the new house to meet the builder. Another friend recommended him, and he is fantastic. Having said that, we don’t have a quote yet, but I really felt comfortable with him. SO looking forward to moving to our new house when the small renos are complete (we want to build in a fifth bedroom, repaint and lay new tiles/carpet, in particular – also looking at installing solar, and adding a carport and back patio at some point). Busy busy!