The books listed here were not necessarily released in 2011, but read in 2011. You can read reviews of many of the books I’ve read over at ASif! or sometimes on Goodreads, which is where I keep track these days. I read over 400 books during the year – many of them for children or young adults, but if it weren’t for Goodreads, I don’t know how I’d remember them all! 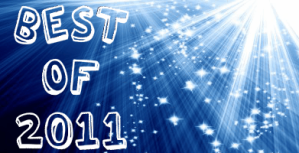 The Vorkosigan Saga (reread and blogged with Alex)

Happy as Larry by Scot Gardner

Treachery in Death and New York to Dallas by JD Robb

The Fitzosbornes in Exile by Michelle Cooper

Songs of Love and Death edited by George RR Martin

Daughter of Smoke and Bone by Laini Taylor

This is a pretty long list, derived almost entirely from cross-checking those books I gave five stars to on Goodreads in 2011. However, if you check out my Goodreads, you’ll note that there are hundreds of unstarred books – these are CBCA judging books and I have not included my favourites from those here, because it’s an ongoing judging process. There are some VERY excellent books in the mix though, and I look forward to starring them later this year!